Our next Feature Friday article introduces an extraordinary and deep-thinking artist whose live performance art, sculptures, and paintings interpret important, personal, and historic issues experienced by him and his family including war, migration, sexuality, and identity.


About KV DUONG
KV was born in 1980 in Ho Chi Minh, during a troubling time in Vietnam’s history, due to influences left by the war and the political instability. With suppression of freedom and poverty all around them KV’s parents attempted and succeeded in a dangerous escape in search of a new place to live. They moved to Toronto, Canada as a minority immigrant family and many years later KV moved to London, England, where he now lives and works as an accomplished artist.

“War trauma and integration correlate with the artist’s coming out as a gay Asian man.”

KV manages to articulate all these experiences through his art which often includes photographic backdrops of historic scenes especially the Vietnam war. In his focused live performances, he moves with poise and purpose and just as an image takes shape, he destroys it leaving behind the remains of something once beautiful. A strong message. 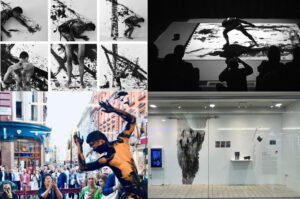 The movement shown in his pieces represent displacement, migration, and also his insatiable desire for knowledge and progress.

The drive behind his work comes from a need to tell truths on issues that he has experienced first-hand, that others have distorted.


Where can KV Duong’s work be seen?
No Place Like Home (A Vietnamese Exhibition) – Canning Gallery, London – 4 May -29 May


About our #FeatureFriday posts
Our series of #FeatureFriday articles introduce interesting artists and art forms to our online audiences. It was a frustration experienced with social media algorithms that led to the start of this series. Realising that this was an issue for many others we decided to help with shout outs for selected artists or galleries many of whom offer something a bit out of the “ordinary”.